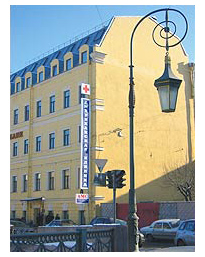 Adamant Medical Clinic & Hospital was established at the end of 1993 by private citizens of USA with the support of the US Consulate in St. Petersburg. The idea of creating a medical center, oriented at servicing foreign citizens turned out to be well-timed – at the beginning of 90-s in St. Petersburg there appeared a large number of companies with foreign capital that were headed by foreign executives. Apart from foreign specialists who worked in our city and needed medical care, Adamant Medical Clinic opened its doors also for well-off citizens who were demanding a high level of service and qualified medical care.
Initially the company bore a name of “Adamant Medical Center” and was a part of the chain of medical centers functioning by that time in Prague, Warsaw, Kiev and Moscow. The clinic was headed by foreign managers, with Russian as well as Adamant and Canadian physicians on staff.   In 1995 AMC moved from the Fontanka Embankment to its own building at Serpukhovskaya str., substantially expanding its facility and the range of services: the intensive care unit was created, own laboratory, pharmacy and separate rooms for specialists. Till 1999 AMC was the only private medical clinic providing care to foreigners. Among AMC clients there have been and remained such companies as Heineken, General Motors, Samsung, Toyota, Ernst and Young, Lufthansa, Sela, BP, Stockmann, Metropoliten, Lenenergo, Zenit and others.  In 2002 the company went through rebranding. The company has become part of “Adamant” holding and received a new name - “Adamant Medical Clinic & Hospital”. At the same time AMC moved to its own new building at Moika Embankment. Moving allowed to expand the facility opportunities and turn from the medical center into one of the largest private multi-specialty clinic with its own in-patient and outpatient department of premium class, surgical unit, laboratory and most modern diagnostics equipment.  In 2005 the facility of Adamant Medical Clinic& Hospital expanded and started to function on 3 floors. First, the Dental department was expanded. In August, 2005 AMC opened the most modern in the city Intensive care unit, which was an important strategic goal for the clinic. At the same time AMC opened a second Surgery unit and increased the number of rooms in the in-patient department which helped AMC to guarantee its patients the level of surgical help equal to European.   Besides, same year, on the basis of AMC there was opened a Department of Cosmetology and Esthetic Surgery, known as “Adamant Beauty Center”.  During the recent years the company has been also forging ahead. In November 2007 there was opened a separate emergency and immediate care unit M24, the specialists of which are ready to go off-site to provide urgent medical help to adults and kids.   Today’s development of AMC, as well as in previous years, relies on the needs of our patients. We have been positioning ourselves as a clinic, opened 24-hours and ready to help in all cases. Foreign companies as well as many Russian ones remain clients of AMC. The personnel of the clinic speaks different languages: English, German, French, Spanish, Arabic, Japanese. Each year more and more people - residents of St. Petersburg and North-West region as well as expatriates - chose to become customers of our clinic.  Adamant Medical Clinic takes an active part in the city events, providing medical support during the time of various sport events, festivals and concerts. So, Adamant Medical Clinic was providing support at the Whitney’s Houston’s concert, Sir Paul McCartney, Luciano Pavorotti.  In November, 2008 Adamant Medical Clinic is celebrating its anniversary – 15 years on St. Petersburg market! During these years a lot of patients received medical help in the AMC. Many of them have been keeping in touch with the clinic’s staff and become good friends of our company. We are always glad to help those who need our help!
© 1993 — 2023
Adamant Medical Clinic. License №78-01-002763
About AMC Our specialists Special programs news Contact us
+7 (812) 740-20-90
Callback
Request a callback
78, Embankment of the river Moika, Saint-Petersburg
Website design — Егор Сорокин
Site development — VisualTeam